Almost a year ago I decided to stop using PHP as a language for my projects and decided to start developing all my web type projects using frameworks for Ruby, I can now say I’ve mastered Ruby on Rails and Sinatra.

Even so, and after discussing with several clients my way of working and the technologies that I use to create their projects, I’ve decided to re-take a chance on PHP. Over the years working with this language I used several frameworks (most with MVC - Model/View/Controller paradigm) including Zend, CodeIgniter, Symfony and PHP-Rapyd (the latter even being small helped me to create light projects in a fast way, thanks to Felice Ostuni) and had always chosen the same CMS to offer my clients, currently built on CodeIgniter: PyroCMS but some time ago its developers have decided to migrate this project to Laravel and this is where my story began.

Before continuing, I want to clarify that if I criticize the project Laravel, I’m going to be constructive criticism (I hope). It has been several years since the last flurry of news in the world of web development for PHP developers, and after new ORM’s, new programming paradigms, new database engines (NoSQL mostly), no one had made a big effort to have all these new technologies at hand on the same project.

I was tired of listening to all my clients saying:

Writing code from scratch? What good web developer do that today? Not that this is an operating system with orphaned applications using custom libraries. My work would not be done as fast if not use a framework in either Ruby, Python, PHP, Javascript, CSS.

After reading so many good reviews about Laravel and after realizing that the only CMS that I would recommend with closed eyes to someone will migrate to this framework, I decided to have a look and write some code… and I fell in love with it as I fell with Ruby on Rails since I wrote my first lines of code in Ruby for the web. It is just fascinating as the work of Taylor Otwell and his partners has grown so much in so little time, Laravel I can ensure that you are giving more life to PHP using its advance and the power of new technologies.

So the only thing left for me to say is Gracias, muchas gracias.

After several attempts to use Laravel in new projects, I decided to create this simple script to generate a basic development environment for my work. This script basically remove all the useless folders and files generated through Composer using the default configuration require-dev and will grant write privileges to the required folders; in my case this script reduced the size of the directory where Composer installed Laravel in more than 80MB from 115MB to 32MB. Well 32MB is very much for a startup project comparing this size with the 316K of a startup project in Rails, but you should know that those 3rd vendor libraries (mostly from Symfony repositories) are very big in size. 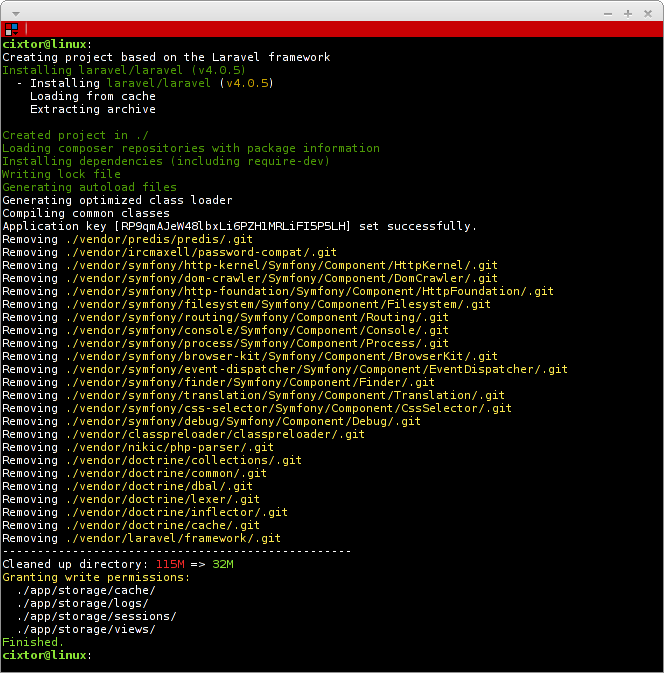