After months working with MVC Frameworks for JavaScript like BackBone.JS, Cappuccino, JavaScript-MVC, Ember.JS, HandleBars, Sammy.JS, Spine.JS I’ve decided that Angular.JS will be my choice for a long time since now. Why?, well that’s a good question, each technology has advantages and disadvantages so I won’t say Angular.JS it’s better than the others because they all have advantages that others do not have.

Angular.JS is an open source project licensed under the MIT license and is supported by Google since 2010. It fits the definition of a framework the best, even though it’s much more lightweight than a typical framework and that’s why many confuse it with a library; it is 100% JavaScript, 100% client side and compatible with both desktop and mobile browsers. So it’s definitely not a plugin or some other native browser extension. The project is called AngularJS because HTML has angular brackets {...} and ng (its namespace) sounds like Angular.

HTML is great for declaring static documents, but it falters when we try to use it for declaring dynamic views in web-applications. Angular.JS lets you extend HTML vocabulary for your application. The resulting environment is extraordinarily expressive, readable, and quick to develop.

Angular.JS is a toolset for building the framework most suited to our application development. It is fully extensible and works well with other libraries. Every feature can be modified or replaced to suit our unique development workflow and feature needs. 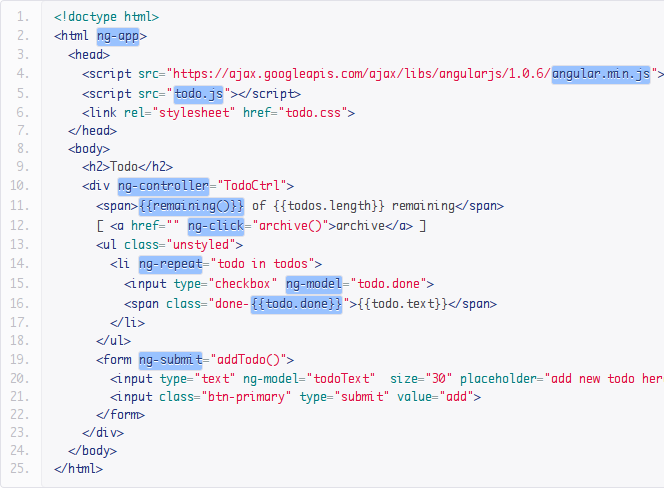 Wiring up the Backend:

Like any other technology, Angular.JS is not impervious to attack. Angular.JS does, however, provide built-in protection from basic security holes including XSS and HTML injection attacks. Angular.JS does round-trip escaping on all strings for you and even offers XSRF protection for server-side communication.

Also it was designed to be compatible with other security measures like Content Security Policy (CSP), HTTPS (SSL/TLS) and server-side authentication and authorization that greatly reduce the possible attack vectors.

Angular.JS can use jQuery if it’s present in the application when it is being bootstrapped, if jQuery is not present in the script path, Angular.JS falls back to its own implementation of the subset of jQuery that its called jQLite.